During the weekend of the Bang Your Head (BYH) festival in Germany Chris (CT)and Tino Troy (TT) gave several interviews. This is a compilation on the current status of the band. A big  thank you is required to Eddy Meuwese from “Lords of Metal” as his interview provides the bulk of this page. Eddy’s full interview as of 2009 is here on “Lords of Metal” website.

BYH DVD Interviewer: Most artists say that going in the studio is more work than pleasure. Do you find that yourselves?

CT: I absolutely love it. 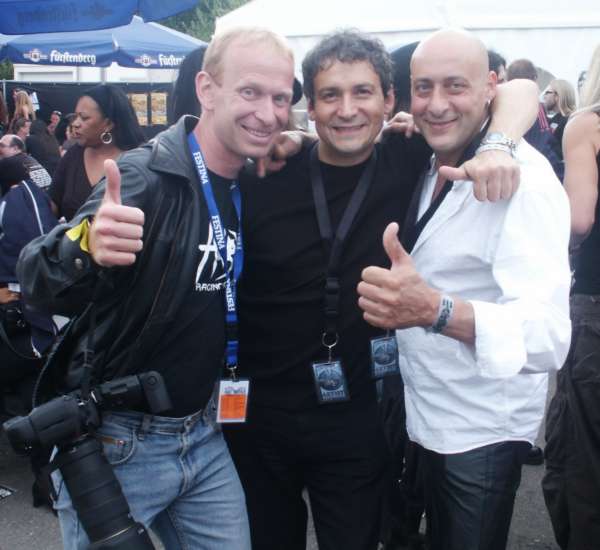 BYH DVD Interviewer: … but you have no problem going in the studio and getting it all over and done with.

CT: No I love being in the studio. That’s your creativity. That’s where it all starts coming out. Sometimes you even make a mistake and you think that is a really nice mistake and you keep it.

TT: Lately I have had my own studio in the house. I did a loft conversion and sound proofed it. We were getting money for recording and it seemed crazy to be spending it on a studio by the hour when we could buy the equipment and spend all the time we wanted in the studio. The last three albums were done like that and it is nice to have that open book so that you are not clock watching. If something doesn’t work one day you don’t have to worry. In the Studio you might be down to do Guitar solos but you might not be feeling inspired that day. With a home studio you can take it any time you want really. If at 2am in the morning you suddenly get an idea you can just go into the studio and record it.

BYH DVD Interviewer: If you had a choice of supporting any band in the world past or present who would you choose? 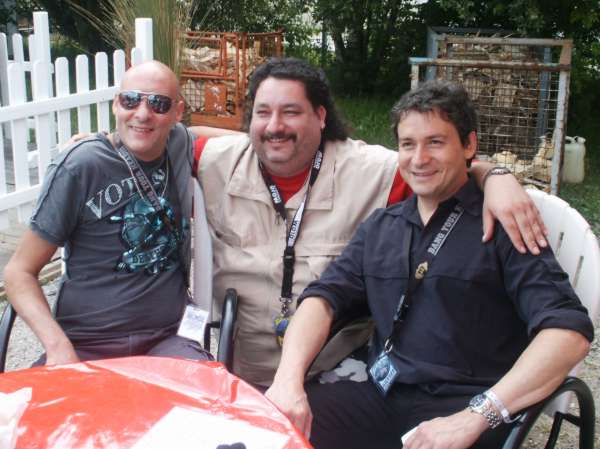 Tino and Chris with Eddy Meuwese

Eddy Meuwese from “Lords of Metal” : Can you tell me about the new line-up of the band?

CT: On Vocals we have Mike Freeland. He was in another band called “Dangerous Breed” which was a lot heavier. There is much more headbangers type of material but I remember hearing his voice on the CD and thinking it was really good.

TT: I used to know Mike years back. He used to be in a pub band called the “Sweetshop boys”. I heard his vocals back then and I was very impressed. He came to my attention again because Bruce Bisland who used to be our drummer suggested him. Bruce gave us his number and we called him up and it went very well. 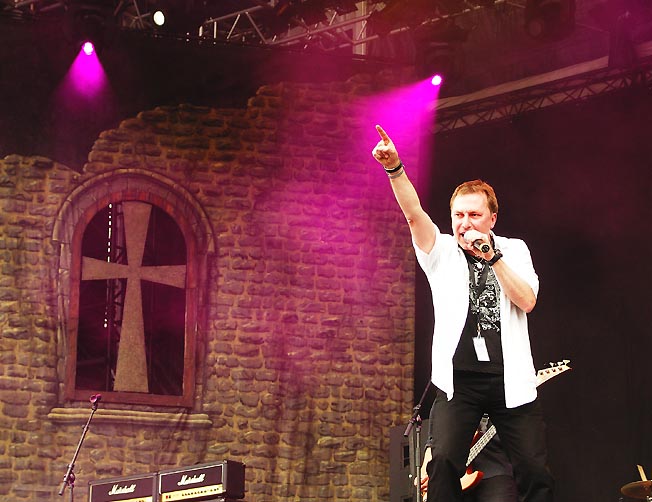 Eddy Meuwese: Did you audition him?

TT: Yes he did a couple of the older tracks and then we got him to do a couple of the tracks that will be on the forthcoming album to see what flavour he would give the band and it worked out really well.

TT: Yes I was a little surprised as he is a little bit shy. But yesterday I said “Yeah! Go out there and give them hell” and he really used that stage and went for it.

Eddy Meuwese: Was it the first time he was on stage with you?

TT: Yes we have done some warm up gigs but it is the first time he has been at a big European festival like this with us.

Eddy Meuwese: Who else is in the band?

TT: We have Benjy Reid on drums. I have known for a little while as well. 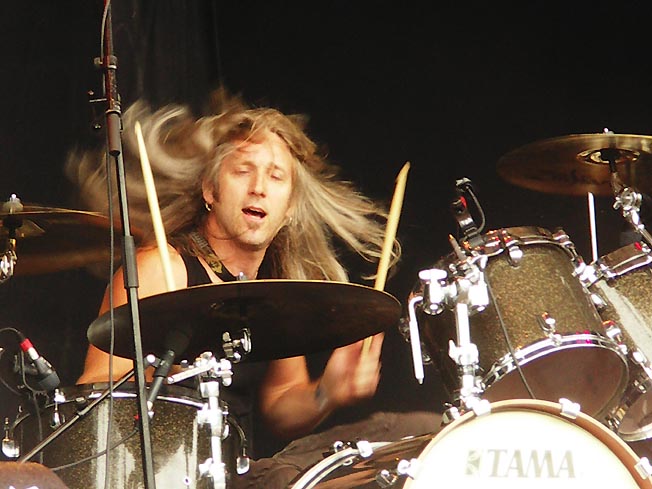 CT From www.streetclip.tv interview: Benjy is quite a flamboyant and technical drummer. He is superb. I think he is a really good unit.

TT: Andy Burgess our other guitarist also plays with me in a pub band in London. It is a fun thing where we do rock covers. Because of that we have got to know each others playing styles and our harmonies and sounds really compliment each other so it seemed a natural progression for Andy to join us in “Praying Mantis”.

Eddy Meuwese: So Dennis Stratton is no longer in the band?

TT: No it is a difficult thing with Dennis. Dennis is a great guy and he really got the crowd going and everything. We just had differences of opinions on guitar sounds and things.

Eddy Meuwese: Maybe he is a little heavier?

TT: No I wouldn’t say he was heavier he is quite melodic as well. I don’t know what it is really. It was just the compliment of sounds. Dennis likes a very trebly guitar sound and we just felt it didn’t quite fit with my guitar sound.

CT: I think it is particularly important for Tino because he gets a mellow round sound.

TT: In the studio we have been able to make the guitars work together. In the past we have not played live too much and I think the live sound has worked but it was not always what we hoped for. With Andy this will no longer be an issue and with this new band line-up I think we really want to go for it and start playing live more often. Another advantage of the new line-up is they are all younger than us oldies and they are really enthusiastic to get out there and make the band even more of a success. 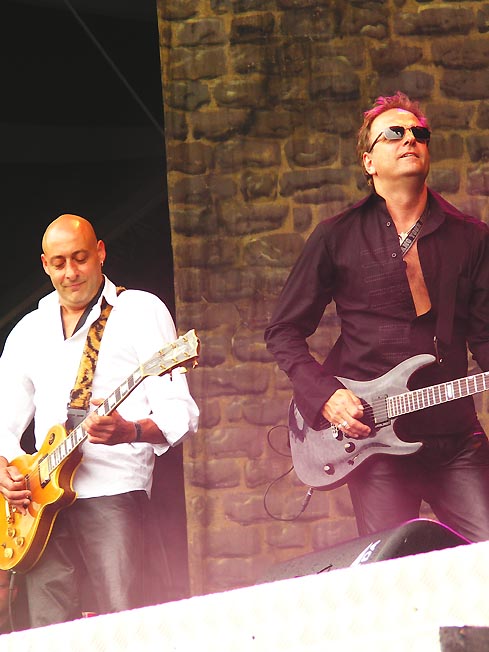 Eddy Meuwese: You have had so many line-up changes. Are you hard to work with?

TT: No I think the real problem has been we haven’t done enough. We have done the albums and Japanese tours but we have never worked enough to keep a band on retainers and you can’t expect people sit around and wait for the next cycle of album and tour. We have had a lot of problem keeping singers but our new guy Mike Freeland is great. He is very unassuming and quite shy in a way but like I said earlier when I saw him on the stage yesterday I thought “Yeah he has got it”. I am really proud of him. In fact I think he was the best person in the band yesterday and he really helped carry it off for us.

Eddy Meuwese: Are there big plans for a new

TT: Yes Chris has already written a whole bunch of songs and I have a few in the pipeline. We just have to knuckle down now and put it into some sort of format where people can hear it. Andy has come up with an idea of putting out tracks on the internet as we finish them so that we can keep the interest there. Then when we have a collection of tracks we can put them out on some sort of package. Working this way we will get chance to get feedback from the fans and also live with the songs for a while. How many times do bands have to work to a deadline and rush through the mixing stage to release an album on time and then a few weeks later wish they could change something? With this way of working and releasing songs we have the opportunity to live with the songs for a few weeks and then tweak them if we want to for a final CD/DVD release.

Eddy Meuwese: When you look back at the past line-up’s which one do you remember the most?

TT: The one where we did two albums on the trot with the same line up.

CT: Yes I think it was special for us to do two albums “Forever In Time” and “Nowhere To Hide” with the same vocalist. When we think back on it and say “Why has been so hard for us to keep vocalists?” It isn’t us. To be honest I actually think we are one of the easiest bands to work with. It is just a case of people’s situations and the way they change. It is a difficult one. Again perhaps it is our fault that we have not been working all the time. Maybe we could have hung onto more singers if we had put new product out more frequently. But I think with a bit of luck what we have now is a stable set up. 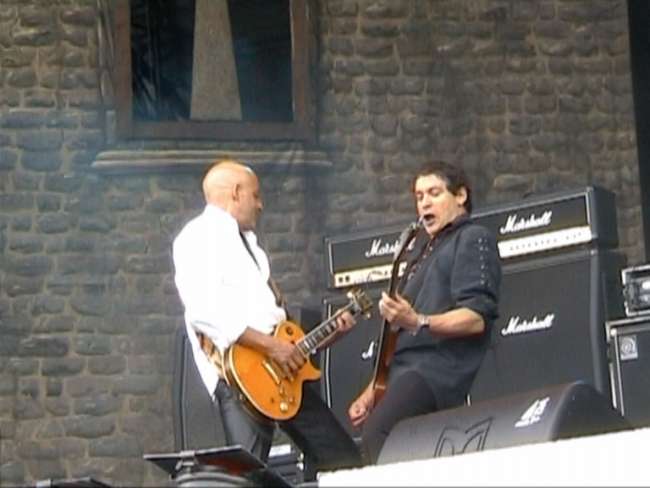