(Here is a conversation I had with everyone in the band and a few friends
at Markus Studios, London. It took place on 10 March 98 during the third and
final week of mixing of the new album “Forever In Time”. Some of the questions I
am asking are on behalf of a fan in Greece) 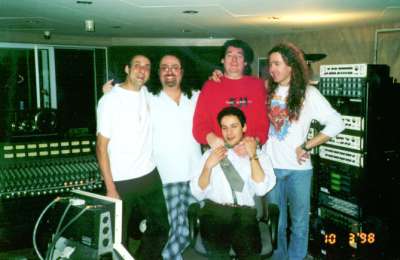 JH – What is the new album called?

JH – And what is the line up this time?

TT: You know that!

JH – When will the album be released? Have you any idea?

JH – And do you agree it sounds like “Cry For The New World”? A bit heavier?

CT: As melodic but a bit more balls

JH – But not really “Time Tells No Lies” like as you promised in two places?
(with a grin)

JH – No it would be boring

TT: Something can sound like it but it is not going to sound the same.

TT: I think it is a cross between “Time Tells No Lies” and “A Cry for the New
World”

JH – How do you explain that although you have released many perfect albums
you have never met with the success you are worth?

Nick John (a friend of the band) – You have not slept with the right
people!

TT: I don’t know how to answer that really

TT: How can we answer that?

JH – Have you tried making it outside Japan again?

TT: We have unconsciously tried!

Nick John – There is no point in this country.

TT: If he wants us to tour Greece tell him to give us about a thousand pounds
each, put us up in hotels and like we’ll come over there.

CT: You see it has to be financially viable.

CT: It’s great when your young and you can just go in the back of a transit

JH – What would it take. How much do you require for a gig? Even here?

TT: If we got, if we got our flights and hotels over there as long as we get
a couple of hundred quid a week each. You’d go for that wouldn’t you?

TT: As long as you could sort of look after you family.

DS: … It’s like a vicious circle if the album is not being released in the
territory …

DS: There’s no point in touring. Then you can’t tour there because your
albums not coming out. So the money’s not there to generate into the tour to
sell albums.

(TT Makes some quip that I can’t make out over my question and there is
general merriment. Tino it seems is very happy. He is always laughing out loud
and joking.)

CT: You see our record company, they’re are pretty good in Japan but
outside of Japan they are Crap.

JH – Do they have to sub-lease it?

Nick John – Do they license to other territories, Pony Canyon

TT: They will do but they have been greedy so far with the rights …

TT: … I think that is going to change now because we have said so.

DS: Yeah but they basically leave that to us and if we want to do a licensing
deal in Germany go a head.

CT: But that’s where we have come unstuck before

Nick John – I mean SPV or someone like that

TT: There is so many people want to license the band now but the Japanese
want to retain 100 percent of the rights. So they say you can buy this much from
us and it doesn’t make it a viable prospect. But now they are going to change
that. You can’t sell anywhere else.

CT: It’s silly I mean they shoot themselves in the foot because they make it
so that it is not worth our while putting it out in any other territory.

CT: Well they were useless.

TT: They didn’t want to promote it.

DS: There was a guy in Germany that got the album, the last one “The Power of
Ten” and he phoned me at home and they were raving about it. And he had just
been on a tour a couple of festivals with Saxon and some other bands there. And
he said this album “Power Of Ten” is brilliant. Because that is why the Japanese
got the hump we did an album more Rock’n’Roll Bluesy come “Power of Ten” for the
European market.

CT: Or tried to

DS: They loved it. They said you come here and you will clean up. You’ll do
brilliantly but then that is where the stumbling block is because we can’t go
out there because we haven’t got any management out there looking after us that
can set it all up. The Japanese in a way are a little bit of a hurdle so in the
end they are trying to get the album out and get us over there and it just …

JH – So would you be prepared to go over there and do festivals with other
bands?

DS: Sure, we’ll do anything.

TT: Sure if you are just covering our expenses and getting a little bit more
that would be great. We don’t want to earn sort of mega-bucks out of it. But if
there is a festival going

DS: This is what annoys us with this band in Japan. We rehearse for two
months, three months, all the old stuff and the new stuff. Get every thing
sorted and we go there and we do one show in Nagoya, 1 in Osaka, fly back to
Tokyo, do two shows in Tokyo and come home. Like 10 days, two weeks.

TT: It’s such a waste

DS: And Extreme from the States go out there and do a tour of all the little
clubs about two hundred people in each club.

TT: That’s what we would prefer to do.

TH: I would prefer to play more often.

DS: Exactly. I said to them why do we do that. Instead of going to one place
and playing a to a couple of thousand people

CT: I think we will enjoy ourselves more.

DS: And they did a little club tour. They went to Nagoya and did about four
clubs there of about 300 people each and then they went to Osaka and did the
same. And they were there for about 3 or 4 weeks doing these little gigs. And it
is just like doing a load of Marquees.

TH: And they are bound to love it because every gig will be full

JH – A lot of people seem to be turning up in Brazil at the moment, Even the
old Saxon band Son of A Bitch, and Di’anno have just done out there

DS: Chris (Tsangaridis the guy who Mixed/Produced “Forever In Time”)
is going out there soon

TT: Chris is going out there Monday to do an album

TH: He is producing a band called Angra.

DS: So yeah it’s a shame because we get asked all, you know, we’d like you to
do this date (Some people arrived for Tony to collect at reception so the
subject died here)

JH – Was Stratus a side project or a real group?

CT: Stratus was a real group. An off shoot of Mantis if you like.

JH – What happened to the production on that. Why is your guitar so sort of
weak? Was it a sign of the times? Or was it just by Bootleg

TT: No it was weak. It didn’t have much guts to it at all.

JH – You seemed to be heading that way even with Clive Burr’s “Escape” to a
certain extent.

JH – What musicians would you use to form an all star band?

JH – Who is he? (I clearly don’t listen to the same music as Mantis)