Here is a conversation I had with Dennis Stratton at Markus Studios, London.
It took place on 10 March 98 during the third and final week of mixing of the
new album “Forever In Time”. 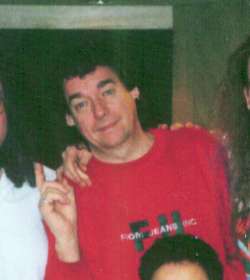 JH – What musicians would you use to make an All-Star Band?

DS – My idol was Steve Lukather. I used to listen to him on various albums
from the pops stuff and all the Quincy Jones stuff you know. He’s my idol. I
would love to… I have toured with David Coverdale and he still is one of my
favourite vocalists.

JH – Oh you mean as support?

DS – Yes. He’s always been a favourite vocalist of mine. You know basically
the majority of the musicians would be from the old school. You know what I mean
like with Lukather for guitarist and Coverdale singing. I don’t know regarding
.. There are so many good drummer and bass players out there. It’s hard to put
your finger on a sort of super-group. Geoff Whitehorn is a good friend of mine
and plays for Paul Rodgers at the moment. He’s a great guitarist. But there is
some many to choose from. But regarding singers and guitarists they are my two
favourites. I am bit of a stick in the mud, I don’t sort of go looking for loads
of different players. There is probably thousands and thousands of better
people. I like Steve Perry and things like that but then again he’s from the old
school. I don’t listen to a lot of new bands because there is not a lot of new
bands that are that good, you know.

JH – How much writing do you do with Mantis?

DS – Between the three of us we are always writing and we are always writing
individually and then we get together the three of us and sort of kick the ideas
about but I find it is very hard when it comes down to writing the song
because.. For instance say the person can get an idea for a song but it is not
completely finished and then you all get together and work on it

JH – You arrange it

DS – Yeah but it still really goes to down to the person that came up with
the idea. So a lot of work goes on behind the scenes but the individual doesn’t
benefit from it but it is all part of working for the band. You know what I
mean?

JH – Is that what Bruce (Bisland) does as well?

DS – Not really no he does little bits

JH – So it is mainly you three?

DS – Yeah and now Tony’s here it is the four of us. It’s hard because it’s
like there is a song on this album … we had so many songs. I wrote 3 or 4. Chris
wrote the majority of them. Tino wrote a couple. But when it comes down to
deciding on the final ten tracks some get left out. Now there is a song “Best
Years of your Life” on this album which I wrote. But there is one that did not
get finished that did not get on the album that I think is better than the one
that is on the album. So it is also a problem with time. If you haven’t got time
… If you have got time to finish the pre-production of a song it gets left off
so your f*****d. You know what I mean? The song that was left off, which will be
on the next album, I think is far better but the one that is on there was
finished and pre-produced.

(This interview was down in a crowded room with lots of other chat going
on so there ends my chat with Denis.)