Here is a conversation I had with Tony O’Hora the new Praying Mantis vocalist
at Markus Studios, London. It took place on 10 March 98 during the third and
final week of mixing of the new album “Forever In Time”. 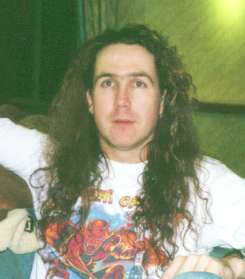 JH – What bands have you been in before?

TH – A lot of Marquee type level bands. The only band of any note I’ve been
in for a while is a band called Onslaught when Steve Burnet(?) left and he had a
band called Lionsheart in Japan and I joined right after Steve Burnet(?). That’s
probably like the biggest named band.

JH – So how was the band that you were most recently with?

TH – That’s the guitarist from Onslaught, a band called the Power Junkies
which we continued after. We all stayed in touch and kept writing and a couple
people started picking up on it so we ended up doing a couple of gigs. More for
the fact that, because I had been in a band with him way before. You get this
sort of link and you, well, I can’t let the guy down. And the band still sort of
on the go but I can’t sort of say “I can’t do that for you” because we put in a
lot of time and I co-wrote half the songs and stuff and I enjoy it . But this is
really good (Mantis), it’s going to be a good album. It’s good for me
because technically it’s going to be my first real release.

JH – So you have not really recorded before?

TH – No. Well millions of demos and stuff like everyone else but this will be
my first real release and it’s good, really good songs.

JH – Are you from America?

TH – No I was born over here but I lived in Canada for ten years.

TH – Yeah. Yeah. Right on the border about half a mile from the States

JH – When did you come back then?

TH – Well, ’cause my parents were from over here and they moved back and I
was doing the bar band thing over there you know. And you think “Oh I’ll keep
going” and then about six months later you think “Ooooh, I gotta go home and see
mum and dad”

JH – You have been described as semi-professional to me

JH – So have you had to do other jobs as well?

JH – So you are sort of professional , but not really …

JH – achieved anything or er, that sounds bad (I am putting Tony’s words
in pretty much word for word so it is only fair I do mine! )

TH – No, no that’s fair enough. I see where you’re coming from.

JH – The “Changes” track. It sounds really like it’s er going back to the
previous album before the Gary Barden one (ie A Cry For The New World)
soundwise

TH – Right that’s good. Because that’s the only compliment we have had from a
couple of people like guys, friends of the band like Dean who has been in Japan
with them, or even Tets and Mike. Even the very first rough demos we did and
they were like around Christmas time and I was busy gigging and my voice was
shagged. We did them like a cassette multi-track and er played them to Tets (From
Pony Canyion) in a pub on a Walkman and he said “Ahhhhh” he said. “We have
Cry for a New World 2”. So he liked it. Because he said right away, I like the
sound of your voice. I said “Great”. We met up, the first time I met Tino was. I
thought “I hope everything goes well” because we got on so well. He had heard me
sing. I said “Great, well what we’ll do is I’ll come round to your house and
we’ll knock something out quickly” just to make sure my voice goes with the
music. Because we could be best friends in the world but if you get the wrong
guy with the wrong band it’s just not going to work.

JH – So how did you come to work with the band then? Did you audition?

TH- No it was by pure – not accident – but a connection thing. A friend of
mine was – um – looking into some stuff I had been doing. He said “I’ve been to
Japan” and er, speaking to Tets because -um-, this guy had an album licensed to
Pony Canyon. “Praying Mantis are looking for a singer” and it might be right up
your street. We’ll give Tino your phone number. And it all happened that day.
Tino phoned me and said “Alright I’ll meet you on Friday”. We met up and then I
went round to theirs the next week and that was it. But they did not advertise
or anything so it was one of those chance kinds of things. It’s good.

JH – So are you singing in the style you sang before or are you adapting to
the Mantis way?

TH – No I have been free to do what I want really but . It’s weird especially
with Tino and Chris because they are quite close – um -, everyone has done the
best thing for the song. There’s times I have wanted to go
“Arrrrrrrrggggggghhhhhh” you try it and it sounds stupid and you just sing out
for the part and you think “Ok that’s good”. And everyone’s been that way. And
the one thing I said to “Jez” when I first meet them was “I would really like to
get involved with these” because they made me feel like an equal just like that
(Snaps fingers). And I mean if they had any ball against singers, they’ve
had so many singers they could joke about it “Here’s another dick head”. They
could have been really off with me and they weren’t. That was part of the thing
for me. It had to be that kind of a relationship.

JH – Yeah, and how much are you sort of involved in the writing?

TH – This time a lot of the songs had been written between Tino, Dennis and
Chris. I mean Chris and done the bulk of the songs and they are really, really
good songs. And what was quite strange was when they started demoing them Tino
was busy getting the studio side of things together so he did not have as much
time to get involved with the actual music side but he was still working for the
bands best interests

TH – So Chris had to do a lot of writing of the songs on keyboards and
things. So a lot of the, if you heard the initial versions of the songs, they
sound simplistic but that’s good because then you are concentrating on the
melody and stuff. And then if you get that right, you think. “The melody will go
like this, and then guitar, then we’ll worry about the rest” and then I think
that’s why it has turned out to be such a good album.

JH – Yeah that’s right. I mean David Bowie although he might be doing a
really complex technical album still wrote most of his songs on acoustic guitar
first.

TH – Yeah that’s right. I think you have to have the ground base.

JH – Yeah. So did you come in sort of at the beginning of the album still
even though most of the songs were written. You were on the early demo weren’t
you?

TH – At that time about half the songs were written and a couple of ideas. I
think Chris had about 3 or 4 that were about 70%. Where they hadn’t been
completed. So he hadn’t put them forward. But they all made the album.

JH – And one of the songs is yours isn’t it according to Chris? I forgot
which it is.

TH – Oh that happened by chance actually because when I met them, these guys
here (Jez and two other friends) That’s quite funny because they do a
Musical Duo in pubs and so do we, so we go up and play rock covers and stuff and
it pays the bills and stuff and it enables you to survive. And that’s where I
met Tino and Chris at one of their gigs. So it was a really nice pub, my friends
were playing we were really enjoying ourselves. So I got up and sang and they
said “Oh great” so I gave them a tape of all the covers I had been doing. And it
just happened to be that that song was a really scratch four track PC recording
and they said “oh, we’d like to do that song”. That was very good. I did not
expect that because it was… Really what had happened was Chris and Tino lost
there dad last year in the middle of the time they should have been doing the
album and so that set them sixth months delay. And then by the time they got a
singer and everything. By no fault of there own in the labels eyes they were
behind.

TH – But they hadn’t done anything wrong.

TH – So it was really we have got to get working. We haven’t got time to sit
down and write 10 new songs together. Um – it’s been really good.

(I then took Tony’s Photo and we started discussing the web site and other
stuff of little interest. But Tony was very complementary about it and thought
the fact it was getting a 100 hits a week was very good)