Posted on 4 July , 2011 by Sonia — No Comments ↓
Praying Mantis – Metalmorphosis 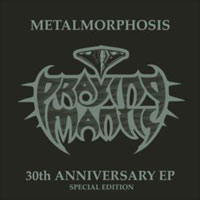 The late 1970s and the early 1980s was a magical era for Heavy Metal music. Many great bands, like IRON MAIDEN, SAXON, DEF LEPPARD, RAVEN and ANGEL WITCH, emerged from Britain at that point of time, forming a musical movement known as N.W.O.B.H.M.

PRAYING MANTIS is considered to be one of the most prominent members of the N.W.O.B.H.M., despite the fact that Hard Rock, or even AOR elements were incorporated in their sound. They gained exposure with the track “Captured City” on legendary “Metal For Muthas” collection. They released “Time Tells No Lies” in 1981, achieving critical acclaim, but a variety of problems cost their momentum. The band managed a reemergence in the 1990s.

“Metalmorphosis” is a special limited edition EP, released by the band to celebrate 30 years since the release of “Time Tells No Lies”. The EP contains 5 some of which are from the original album re-recorded by the current lineup. My skepticism arises when I encounter re-recorded material, but in this case there is a very good reason for the band to do this. This EP contains five Heavy Metal/ Hard Rock musical gems, and a second opportunity for Metal fans, of all ages, to discover and appreciate the band. All tracks sound fresh and astounding, defying the 30 years that passed since their inception.

“Children Of The Earth” is an excellent Hard Rock track, with excellent guitar work, and fabulous vocal harmonies. Furthermore, this track has been released as a download and the profits will be donated in aid of the Red Cross Tsunami Appeal, a good cause without a doubt. “Lovers to the Grave” is a haunting slow tempo track, with PINK FlLOYD influences (in my humble opinion). The previous two tracks, along with “Panic in the Streets”, a quality aggressive track were contained in “Time Tell No Lies”.

The homonymous track, “Praying Mantis” was one of their very first singles, an excellent specimen of N.W.O.B.H.M. with one of those riffs that we metalheads love. The absolute highlight of the EP is “Captured City”. The track will capture the listener with killer guitar work, both lead and rhythm, bone crushing drumming, and above all sublime vocal harmonies.

“Metalmorphosis” is a must have for any metalhead. Do yourselves the favor and get it. Unfortunately, this EP can be purchased only through their website, or at their concerts…