I have just had a phone call with Rodney Matthews about what he could
remember about the drawings he did for Praying Mantis. 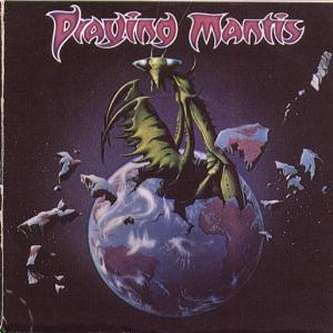 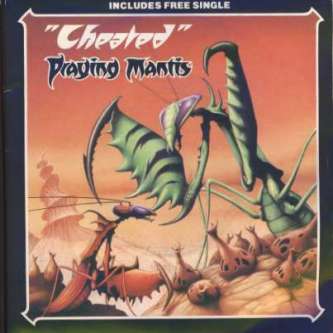 He first remembered that he did the “Praying Mantis” single cover and the
“Cheated” one. And he remembered being annoyed that he never got the artwork back from Bob Keene.

He confirmed the fireball on “Time Tells No Lies” was because of fireball management. I mentioned
that I thought the Wizard had something to do with Neal Kaye but he was
convinced the Wizard was just a Wizard and not represent any ones by looks. 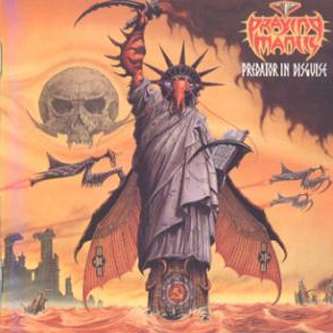 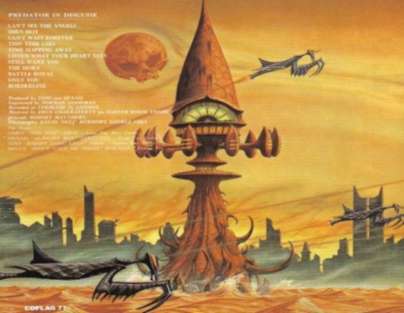 He told me that the Predator In Disguise/Time Slipping away drawing picture
was a combination of his symbolic thoughts on the book of Revelations(from the
Bible) and the album lyrics. He said the Black Skull represent the sun becoming
dark and the Red Skull the Moon. This is mentioned in the Old testament Book of
Joel Chapter 2 verse 10. The Ships going down were, I think, included before he
realised it tied in with the lyrics of Battle Royal.

He apparently has been asked if he was anti-American because of the Mantis
Statue. He is not. It is just that the USA seemed to symbolise the New World
order talked about in Revelation 13. e.g. a Global currency and stuff. He
thought it too complicated to go into over the phone so suggested I check out
his book.

I asked what happened with A Cry for the New World and he remembered
something about the band wanting something like the Planet of the Apes film
scene where the Statue of Liberty is buried. But he was not keen on the idea
because he had done something similar in the past. He also didn’t agree with all
of the album Lyrics and he felt he needed to be comfortable with the images for
him to do his best work.