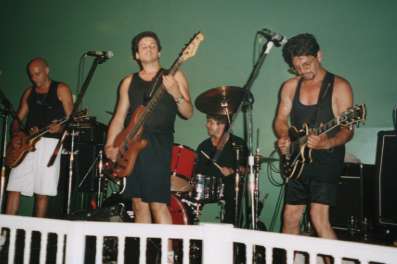 Reunion Line up in Action
These are my personal observations of the London date of the tour. They are
very subjective so probably worthless but I am happy to share them with you.
I hope someone else who went to a gig will write a review for me. It doesn’t
matter if you English is poor. Mine is terrible!

As I was with the last set of Mantis Dates I was eagerly awaiting tonight’s
gig. In fact I had been on edge for days before. I like the 99 Band lineup a
lot. But they haven’t quite caught the 80’s version to me. Tonight was going to
be a major delight or a big mistake. I was really looking forward to hearing
Tino and Steve on Lead vocals. Chris of course has sung lead in recent years.

First I sat through the soundcheck of A Question of time and Lovers to the
Grave. From this I knew it would be a great night.

Paddy Goes To Hollyhead from a couple of weeks before

Next came Paddy Goes To Hollyhead featuring Chris And Tino. I have actually
made the trip to London to see these 3 or 4 times before and usually enjoy them.
They are only a cover band but they are a lot of fun and they do good twin
guitar versions of some really daft tunes such as “These Boots are made for
walking”. Tonight after the soundcheck they were nothing. I just wanted Mantis. 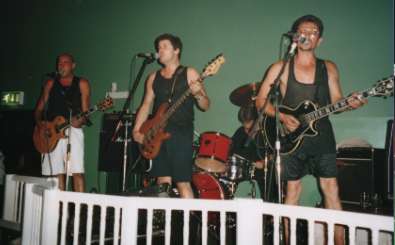 And around 6.45 that is what I got. The ultimate line-up of Mantis performing
the Ultimate Mantis songs including my all time favourite “Beads Of Ebony”. They
in fact did everything from “Time Tells No Lies” except “All day and All of the
Night” and “Rich City Kids”. They also did “A question of time”, “30 Pieces Of
Silver” and “Captured City”. I had initially be gutted when they didn’t do
“Captured City” and Steve’s vocal song “Running For Tomorrow”. But luckily the
band decided to give them a try out around 10 PM after having had some beer. We
also got “A Question Of Time” yet again but I am not complaining. 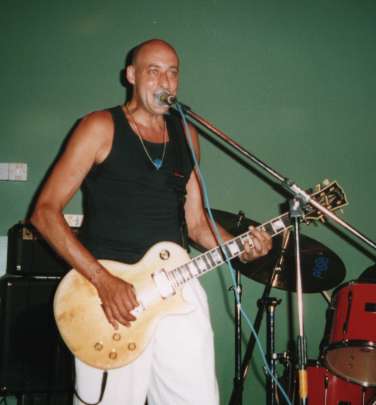 Tino’s vocals were just as I remembered them which again makes me feel sad he
decided to hand over the lead mic. Of course his guitar playing was as good as
ever. 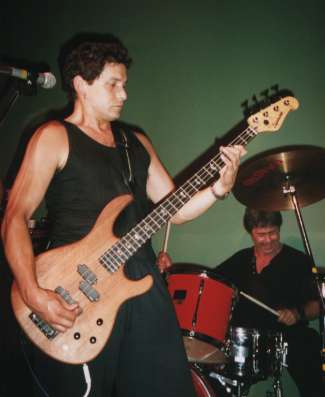 I think Chris with all the Paddy’s work is enjoying these warm up gigs more
visibly than on the last set of warm up dates. 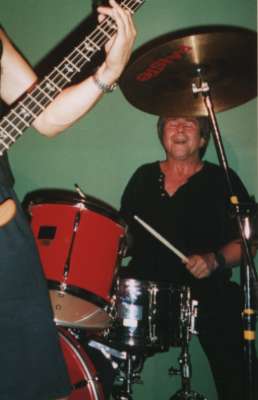 I wondered how Dave Potts was going to play since I don’t think he has played
drums much in the intervening years. As far as I could tell he did an excellent
job. 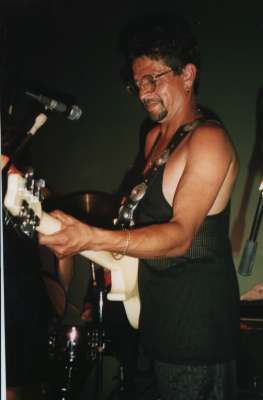 Steve Carrol’s vocals were excellent again much like the album. I believe
Steve is not as keen to sing again now as he hasn’t even been doing backing
vocals like Tino. It was fascinating seen how Tino and Steve shared the Lead
Guitar and how quite often they played together. Unfortunately Steve’s amp was a
little low powered and his leads lost in the overall sound. I can’t say mix as
only the vocals were going through a mixing board. 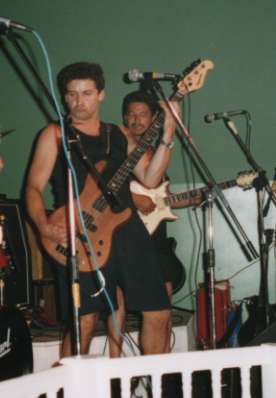 The sound in general in the Shebeen was very bouncy. I think the room was
something like 20m x 40m with the band on a short side. It is a typical function
room for an English pub except it is being made into a good music room. The
musicians hope something will be done to dampen the sound a little as a recent
make over continues to take place in the room.

Bernie Shaw (Uriah Heep and 81-87 Mantis vocalist) was in the audience but
claimed he couldn’t recall the words for an impromptu reunion with his old band
mates. It was a shame but at least we got the missing songs from the set at the
end. I had to leave before Paddy did a final set I hope Bernie didn’t get up and
sing with them (he did the previous week) I had one of my best gigs ever. I wish
Mantis had more UK warm ups and a full tour of Japan to make a trip worthwhile.
With luck there will be a live CD of the Japanese date. I wonder what will
happen with Steve and Dave now. The 99 line-up is still working on the follow up
to “Forever In Time”. I certainly wouldn’t be sad to see a Mantis double bill
tour. Of course it would be hard work for Tino And Chris but great for the fans! 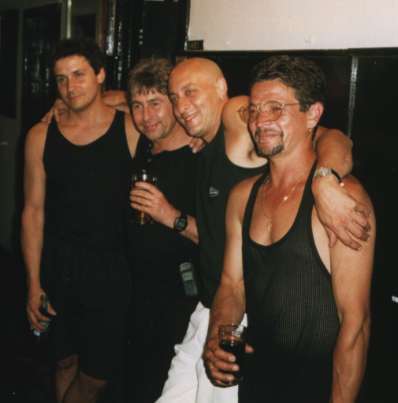 Just before decided to play again

Game For Some More 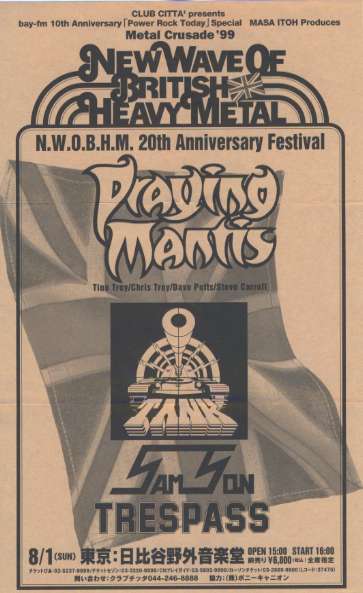 The Poster from Japan (Thanks Yoko)

Review from Classic Rock Magazine Issue 8 In The UK.

For The First time in two decades, Praying Mantis – featuring original
guitarist Steve Carroll and drummer Dave Potts – reunited to emphasize the
powerful melody of their songs. Brothers Tino and Chris Troy, on guitar and Bass
respectively, were on fine form, and ‘Lovers To The Grave’,’Cheated’ and Panic
In The Streets’ have seldom sounded better.

To Close the proceedings, everybody trooped back for a reasonably horrible
romp though ‘Roll Over Beethoven’ before Mantis’ Tino Troy cried out, ‘See you
in ten years time!’

A little closer to home next time please!

Geoff Gillespie (who interestingly was the UK coordinator for the
festival)

The concert has been released by Pony Canyon on a Double CD – NWOBHM 20th
Anniversary Festival – Metal Crusade ’99 PCCY-01418. Cheated is left off the
set.

If you have any photos or reviews from Japan. Please share them with me and
the other fans.